Well, I survived the night in the "most haunted room" at the Manresa Castle Hotel in Port Townsend. It was...disappointing for many reasons. But while I was away, I received a message from punk rocker-turned-horror movie composer, Dave Neabore. He received his envelope and sent a photo. He wrote "Omg! I received your letter and your incredible envelope!! Wow I was blown away and can't thank you enough. I am putting the envelope in my permanent collection to remain there forever!" How nice. I'm glad he likes it.  (I still think I should have sent him one of my haunted house envelopes. Maybe later...) 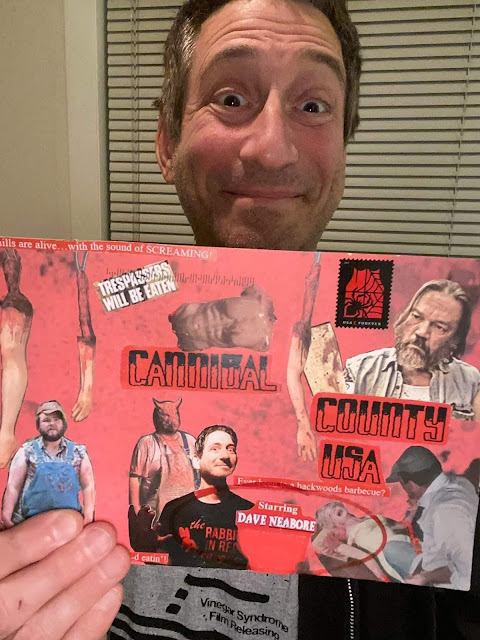 I started this one awhile ago. I was actually making it for someone in Europe---but there was no room to put two international stamps and a huge address. So, I thought about who should get it. I've sent them to my mom, nephew, various friends and former co-workers. Who haven't I sent one to? My brother... Even though he really has nothing to do with either my mother or I, he is still family (and only just two blocks from where I live!). Perhaps he'd like it if I sent one to him as well. We will see what he says, if anything... (D) 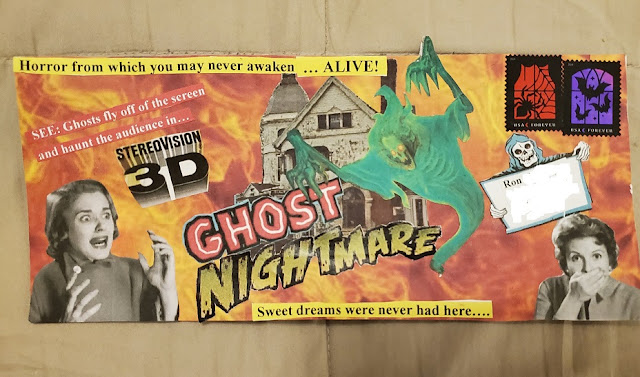 Since I made one for my brother, I thought I'd make one for my sister and her family as well. She has a soon-to-be seven-year-old, and I wasn't sure how spooky an envelope might turn out, so I switched to a space theme with a friendly-looking alien. As I wanted to get it done just before a trip off-island, I had to rush it. It looks very familiar to me--but that's only because I used copies of images I'd used before elsewhere but already had printed up. (?) 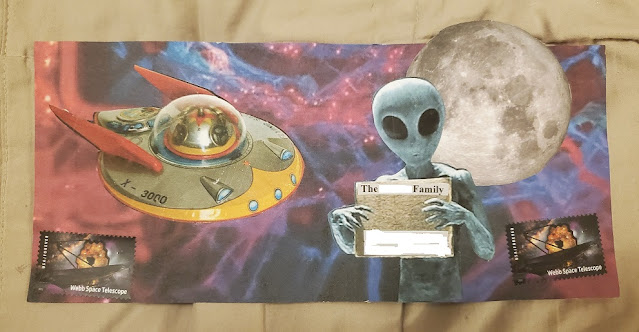 And, of course, if one brother (and a sister) gets an envelope, I need to make one for my other brother and his family. (?) 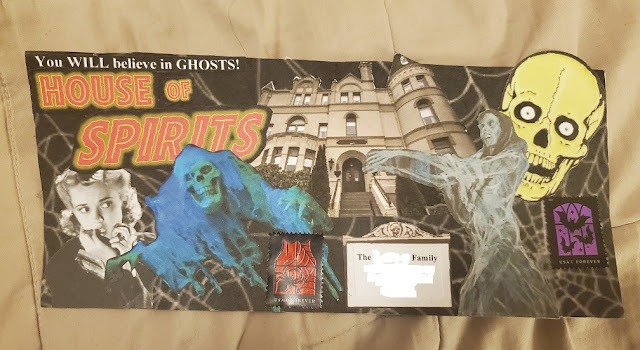 I do not know Greg Diaz and have had no dealings with him. He is new to the International Union of Mail Artists (IUOMA) and I just happened to be looking at the main message board when he happened to post his address (instead of having it posted on his personal page) for another member who asked for it. I thought why not send him something? I was briefly Mr. Welcome Wagon, always welcoming newbies to the site...but then I kept getting unwanted friend requests...which made it hard to re-retire. (NOT that I regret anyone I've become "friends" with at all. I DON'T!) But as a step to not getting any further requests, I quickly stopped the practice. Mr. Diaz does not know this is coming his way. I explained in my letter I was retired and just making envelopes as I felt like it--and asked him NOT to respond. That may seem rude, but at least I DID say hello and welcomed him. And he doesn't have to feel obligated to respond. (D) 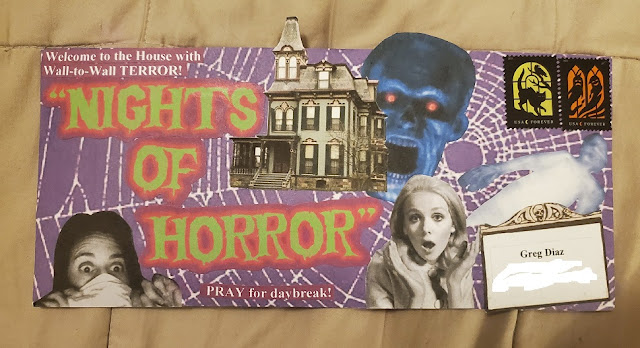 Mikey, who never received the first piece of mail art I sent him, got the one I sent him recently--and shared a photo of him with it. Hooray! It took about two weeks (!!!) to reach him. I am glad he finally got it. 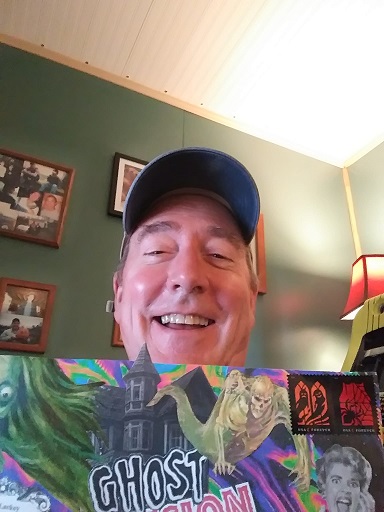 My mail art friend Amy's boyfriend Chris' birthday is coming up. They've stayed at my house. I've stayed at theirs. I made a (lame) birthday envelope for Amy...now here is one for Chris, who is hitting 60. Yowza! Clearly doing birthday cards is NOT my thing... (D) 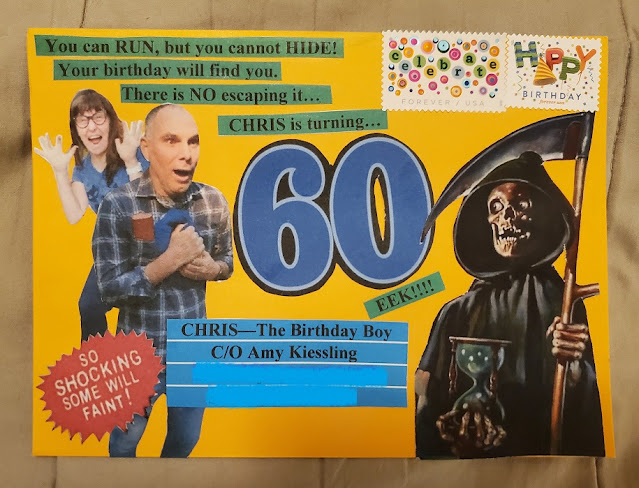 If this envelope looks familiar to you and you've been reading my mail art blog entries, that familiarity is because this is based on one of the cards I made for Maxima Strange's Goth project about Samhain. Of all of the cards I've done for Maxima's projects, this is the only one I did not later turn into an envelope...until now. Why did I wait until now? Because the packet of 31 cards I painstakingly made for the project NEVER arrived. It went into the Mail Art Black Hole / Bermuda Triangle/Jail. I blame my local post office, of course. So, since they never arrived, I thought I'd pull together an envelope based on it after all. Actually, this is basically what the cards looked like, minus the address and stamps. (D) 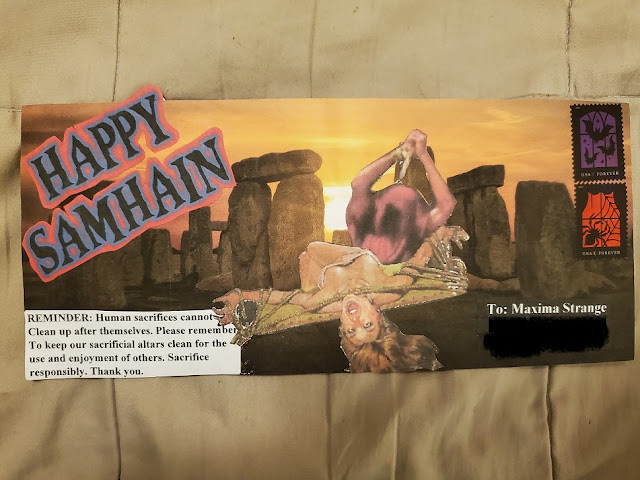 But I still had two other cards in Maxima's big Samhain project. It arrived in mid-October: 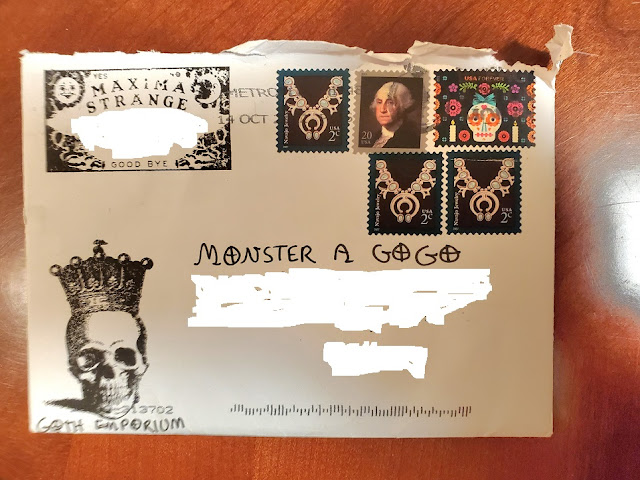 These are the cards inside, all very different. My cards (the one on the bottom left and the "House of Screams) on the third row right) don't "fit" so well with the others. I don't know what I am supposed to do for these things... 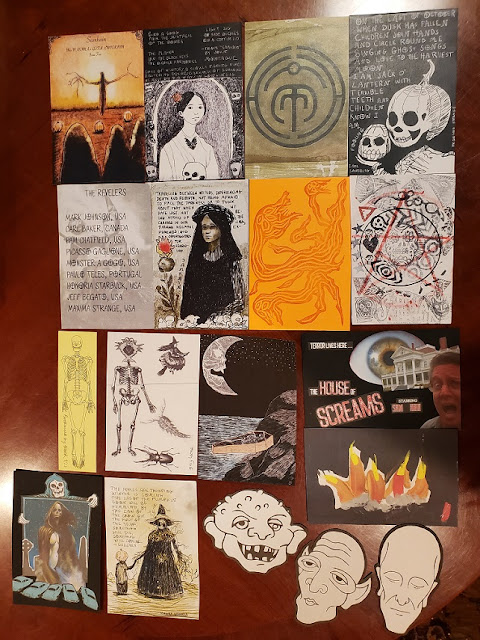 Maxima's next project, still under the "Goth Emporium" umbrella, is called Yule. We are back to only doing 13 cards. This is what I came up with. Meh... 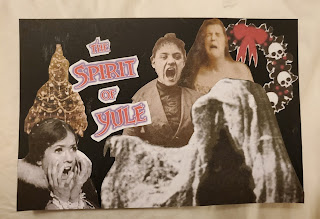 I got it done, but it was not my favorite design I ever made. Oh well. My heart truly was not in it after those 31 cards I made for the Samhain project went missing in the mail...(R) 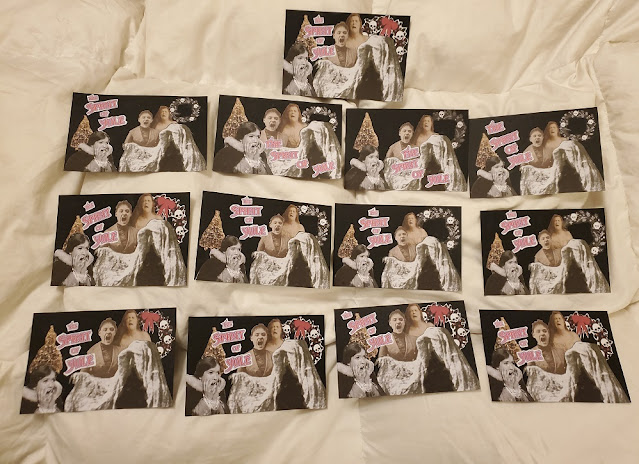 I've turned the card into an envelope as well. This is the "expanded, movie poster" version. The damned stamps are in the way again. (D) 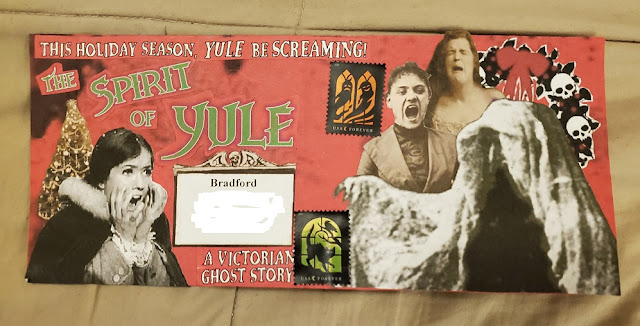 Amy Kiessling sent me some mail art in a groovy, seasonal envelope. As luck would have it, I had to go into Seattle one night for a quick interview (A guy who does a tiki webshow wanted me as his guest. Crazy, huh?) and Amy was able to come and hang out for a while. It was such a delight having her there. 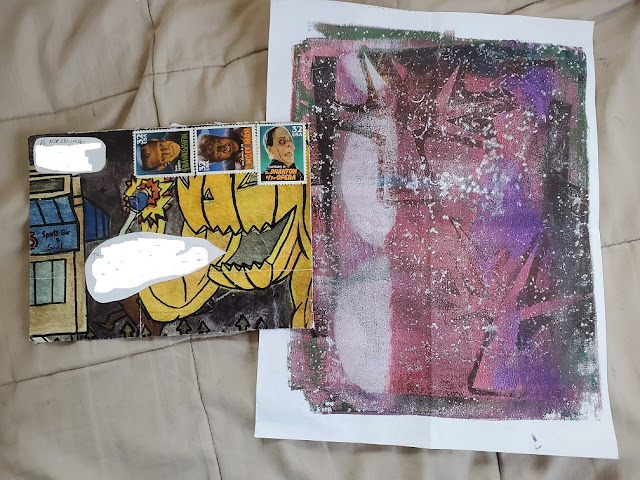 So, since Amy sent me something---I had to send her something back. Just in time for Halloween, it's A-HAUNTING WE WILL GO-GO. (D) 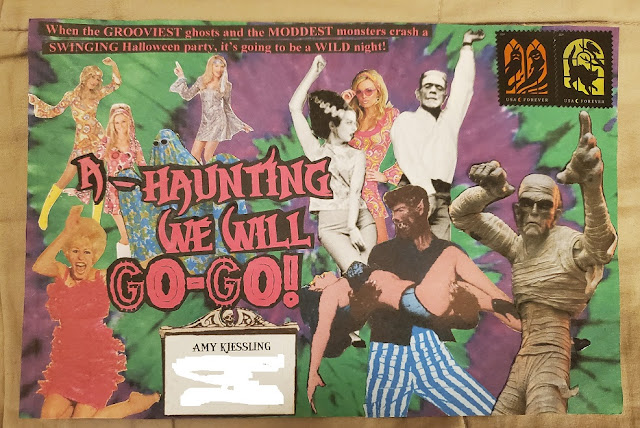 I had sent something to Tara Odorizzi months ago, when I was new to IUOMA. Despite sending her a follow-up postcard and leaving a note or two for her on the site asking if she'd received it, I never heard from her...until a few days ago, just as I was finishing up this envelope for...whoever. She apologized for her delay in responding...and included a friend request. (Argh! Not ANOTHER one...) So this is off to her. (D) 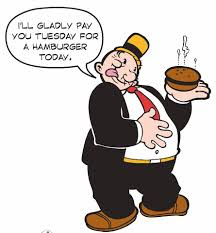 A little more than 10 years ago, I was working for The Fresno Bee. I was in the South Valley doing research and interviews for stories.I was driving around the town of Tulare and I spotted this little old-fashioned looking hamburger joint. I was sure it was a dive, but it was too cute to pass up. Wimpy's? That's what the sign said. Named after the famous hamburger-obsessed character with the catch phrase "I'll gladly pay you Tuesday for a hamburger today," from the old POPEYE cartoons, no doubt. I was charmed by the little place and thought about doing an article on it, but I didn't think I ever did. This past October, while on my way home from Los Angeles, I remembered the little hamburger stand and my idea to do an article about it. It may no longer make The Fresno Bee, but at least I could do a quick blog post about the place. Right? I went inside. The place was nothing fancy and it was small. Still, I was there. Why not do this blog thing righ

While I was a writer for the Fresno Bee, my co-worker, Joshua Tehee, would occasionally send me interesting tidbits, things he thought I would appreciate or needed to see, via email. One day, he sent me this video: My jaw dropped. What had I just seen? The video was for "THE DING-DONG SONG"by Gunther and the Sunshine Girls. WHO? I watched the video over and over. Was it legit or a joke? It was too stupid and silly (and kind of low budget) to be real, but at the same time, it was well made (for its budget) and the song was catchy and fun. I was hooked and was soon seeking out other Gunther offerings and buying his CD. Wow! Way back in 2007 (!?!) I got wind that Gunther and the Sunshine Girls would be coming to California and playing in San Francisco at a small club. Oh my STARS! I HAD to go and see them (of course). I had already become a huge fan. But seeing them perform wasn't enough. I also wanted to see if I could finagle my way backstage, using my Fresno Bee 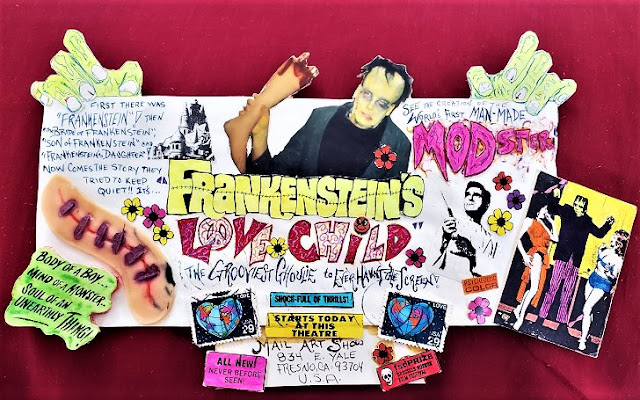 Thirty years ago or so, I was very involved in being an "artist" -- of sorts. I was sharing my art with people all over the world--and they were sharing their art with me. Yet somehow  I had amazingly almost completely forgotten about it--the people, the art, the amount of time I spent working on it--until I was going through boxes and papers in preparation for a move. Back in the 80s and 90s, before there was email or texting, the world relied upon letters to stay in communication with friends in other parts of the world. True, there was still the telephone. But mail allowed you to get your thoughts out on paper, express yourself fully...and not be interrupted by call waiting or someone else needing to use the phone. As a kid who loved to read, I also really fancied writing. I wrote letters all of the time. At some point I took it upon myself to adorn the envelopes. I would send these missives to friends and families with stickers, doodles and other forms of decorations all